In what was a very, very busy weekend for our athletes and volunteers we have lots of results to catch up on from; Aberdare, Swansea, Woodford, Cardiff, Porthcawl, Swindon & Tenby, including yet another all time club record!

Saturday 2nd July was round 3 of the Senior Men & Women National Athletics League @ Woodford, London after another overnight stay the squad put in another really solid team performance to place 5th on the day, and now lie in 10th in the league table progressing to the B final for the final fixture on 20th August in Bedford. Individual highlight included top 3 placings in the A string events by:

Our sincere thanks to the whole team, officials and team managers who had to make yet another very long journey all mucking in to support the team, click here for the full results.

Saturday 2nd July was the Welsh Schools U15 U17 & U20 Championships @ Cardiff where our juniors were representing their school district team for which in most cases this was Afan Nedd Tawe. Well done to all those who took part in this great grass roots event. Highlights included medal winning performances set by:

Very many congratulations to all those who took part, click here for the full results.

Sunday 3rd July was round 3 of the U13 & U15 Youth Development League @ Swindon where the team put in another improved performance but unfortunately not quite enough to avoid going into the relegation match on Saturday 30th July at Yate. At Swindon the team amassed 403 points to place 3rd on the day and finish the league in 5th out of 6 teams. Important at Yate that the Boys are out in full supporting the Girls teams so that we can try and remain in the top division please. Individual highlights at Swindon included an all time club record for U15G Libby Hale recording a time of 2.13.8 congratulations Libby! And A string wins for U15B Oliver Philpott 3.20m Pole Vault; U15G Seren Anderson-James 2.40m Pole Vault; U15G Matilda Quick 10.62m Shot; U15G Efa Williams 19.64m Discus; U13B Sean Strevens 1.40m High Jump; U13G Georgie-Bo Davies 4.10.7 1200m and U13G Mandida Rushesha 1.36m High Jump.

Our thanks to all those athletes that made the trip to support the club and their team mates, click here for the full results.

Sunday 3rd July was the Tenby 5km, 10km & Half Marathon where Wales hosted a Festival of Running at Masters International. Many athletes represented England and Wales in an international match across three distances: 5km, 10km and half marathon and four age groups: 35-44; 45-54; 55-64 and 65+ for both men and women. The match was scored with the first four home from each team in each age group in each race with a cumulative total across all races determining the winner. All three races were held on challenging courses. Swansea Harriers was well represented, with the following athletes selected to run for Wales: 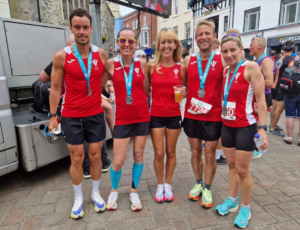 Thursday 30th June For our senior endurance runners club championships now we have passed the end of June ending with the 3000m track time trial, June saw a busy month of Championship races including several 5ks, The Swansea Half marathon plus the superb team victory of the Mens Open team at the Castles Relay (for the first time in 20 years). The initial charge has calmed down and at this halfway stage the women’s competition has got closer with Llinos Jones still leading, but fresh from 3k success comes Nina Brocklebank in 2nd place, closely followed by Helen-Marie Davies in 3rd. In the mens, Jonathan Butler still leads the away after a fantastic 14:40 in the SAFA 5k. Matthew Verran just holds 2nd place after a 9:18 run at the 3k TT with Steve Taylor (also holding the most points for participation) in 3rd. Still a lot to play for! Other notable performances in the 3k TT were Martin Kearns, who at age 62 ran a superb 11:30 which gave him the best age-graded time on the day of 9:05. Thanks again to all who ran and also to Brian and Paul our race officials plus Dan Newton, Tom Bacon and Danny Otteson for supporting on the night.

Next up of the July races : Aberavon 5k (6th) and Ammanford 10k (10th), the last 2 of which have entries still open here. Well done everyone, we’re only half way there!